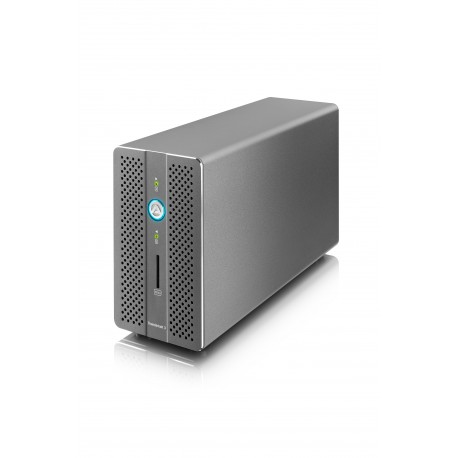 Expand the capabilities of your laptop and declutter your workspace with the Thunder3 RAID Station. This solution combines four essential functions every laptop user needs into one product, giving you additional storage space, providing you with important interfaces such as Gigabit Ethernet, USB and DisplayPort, recharging your battery and reading your SD cards. All this is built into a single product that connects to your laptop with a single Thunderbolt 3 cable.

Thunderbolt 3 brings Thunderbolt to USB-C at speeds up to 40 Gbps, creating one compact port that does it all – delivering the fastest, most versatile connection to any dock, display, or data device. For the first time, one computer port connects to Thunderbolt devices, every display, and billions of USB devices. A single cable now provides four times the data and twice the video bandwidth of any other cable, while also supplying power to bus-powered devices.

The second Thunderbolt 3 port on the Thunder3 RAID Station operates the same as a Thunderbolt 3 computer port by supporting Thunderbolt 3 (up to 5 daisy chained), USB 3.1 (10 Gbps), and DisplayPort devices.

The two USB 3.1 Gen 1 host ports make it easy to connect your USB devices that come with a Type-A connector to your laptop. Instead of buying an adapter or new cables, simply plug your existing USB devices into the Thunder3 RAID Station and you are all set.

The Gigabit Ethernet interface is ideal for notebooks that require reliable, accelerated access to external storage and networks for I/O demanding applications but typically lack 1GbE connectivity or the capability to deploy an internal PCIe network card (NIC).

The dedicated DisplayPort connector makes it easy to connect an additional monitor to extend your workspace. This video output capability requires a Thunderbolt 3 connection to the computer and will free up the second Thunderbolt 3 port for Thunderbolt 3 (up to 5 daisy chained), USB 3.1 (10 Gbps), and DisplayPort devices.

A card reader for your SD cards exactly where you need it. Plug in your card and backup your media files straight to the external drive.

Optimized for every environment

A big advantage of the built-in hardware RAID controller is that the RAID set is OS independent, so the storage drive can be moved from one system to the other with ease. Because the RAID set is managed inside the Thunder3 RAID Station, there is nothing else do be set up on the computer.

The PCIe to SATA controller makes use of two PCIe lanes. When using Non-RAID, this makes it possible for a single SSD to run at full SATA 6Gb/s speeds and deliver transfer rates in read over 500MB/s.

The Thunder3 RAID Station supports power delivery (PD), providing 27W of power to laptops that support charging from a 9V/3A power source (e.g. Late 2016 MacBook Pro). This allows you to recharge the battery even when the laptop is not plugged into any other power source.

For added convenience and flexibility, the Thunder3 RAID Station can accommodate both 2.5-inch and 3.5-inch SATA drives. The assembly is completely tool-less, so drives can be easily installed or uninstalled no matter where you are.

The Thunder3 RAID Station lets you know what's going on at any time. The LED lights on the front indicate the power status and the disk activity and the LED lights on the back will show you the network speed and status when an Ethernet cable is connected.